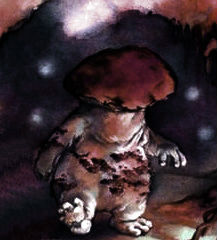 The mushroom men are not aggressive by nature, and struggle to defend their home from darkness. They devote their energy largely to horticulture, but the colourful spores they release seem to suggest a capacity for complex social activity.

Green Spores - Infant myconids release green contentment spores when they feel safe and comfortable, for example if the cave they have been left in is warm and damp. It is possible to befriend an infant myconid while they are releasing green spores by making a DC20 handle animal check or a DC25 diplomacy check. While surrounded by green spores, a character gains a +1 bonus to fortitude saves. Green spores travel at ten foot per round to an eventual radius of forty feet.

Blue spores - Juvenile myconids release blue pacification spores that affect all adjacent units. Any infant myconid which is adjacent will immediately begin releasing green spores. Any player adjacent to a juvenile releasing spores must make a DC16 will save or be affected by pacification for d4 rounds. A pacified creature cannot act, and simply stands or sits on the ground. Taking damage immediately ends pacification, and the character cannot be affected by the same myconid's pacification for one hour after making a successful save. Myconids will not attack a pacified creature, but lead the captive to the Sovereign.

Purple spores - Mature myconids continuously release purple spores, which spread much further and last muchlonger than the other forms of myconid spore. The entire Gloom Garden is covered by a light layer of purple spores, imposing a -2 penalty on will saves for players. The purpose of these spores seems not to be reproductive but to facilitate telepathic communication.

The will DCs on this page include the soporific influence of the Gloom Garden.

Retrieved from "https://super-secret-dark-souls-dungeons-and-dragons.fandom.com/wiki/Myconid?oldid=1606"
Community content is available under CC-BY-SA unless otherwise noted.